Our Original Species: The Cyber Wolves

Do you have a love for computers, and all things techy? Does circuitry fascinate you? How about the shiny glow of LED lights?
If so, you just might fall in love with our new Original Species: the Cyber Wolf!

The very first Cyber Wolf was born by PeaceWolf Creations in 2018, and his name is Tek (pictured).

Some key features of Cyber Wolves include disctinct circuitry markings, glowing, and "power" symbols on the tops of the paws.

*This species is currently CLOSED and may NOT be reproduced freely. Cyber Wolf characters may only be purchased from PeaceWolf Creations™.

What Makes a Cyber Wolf? 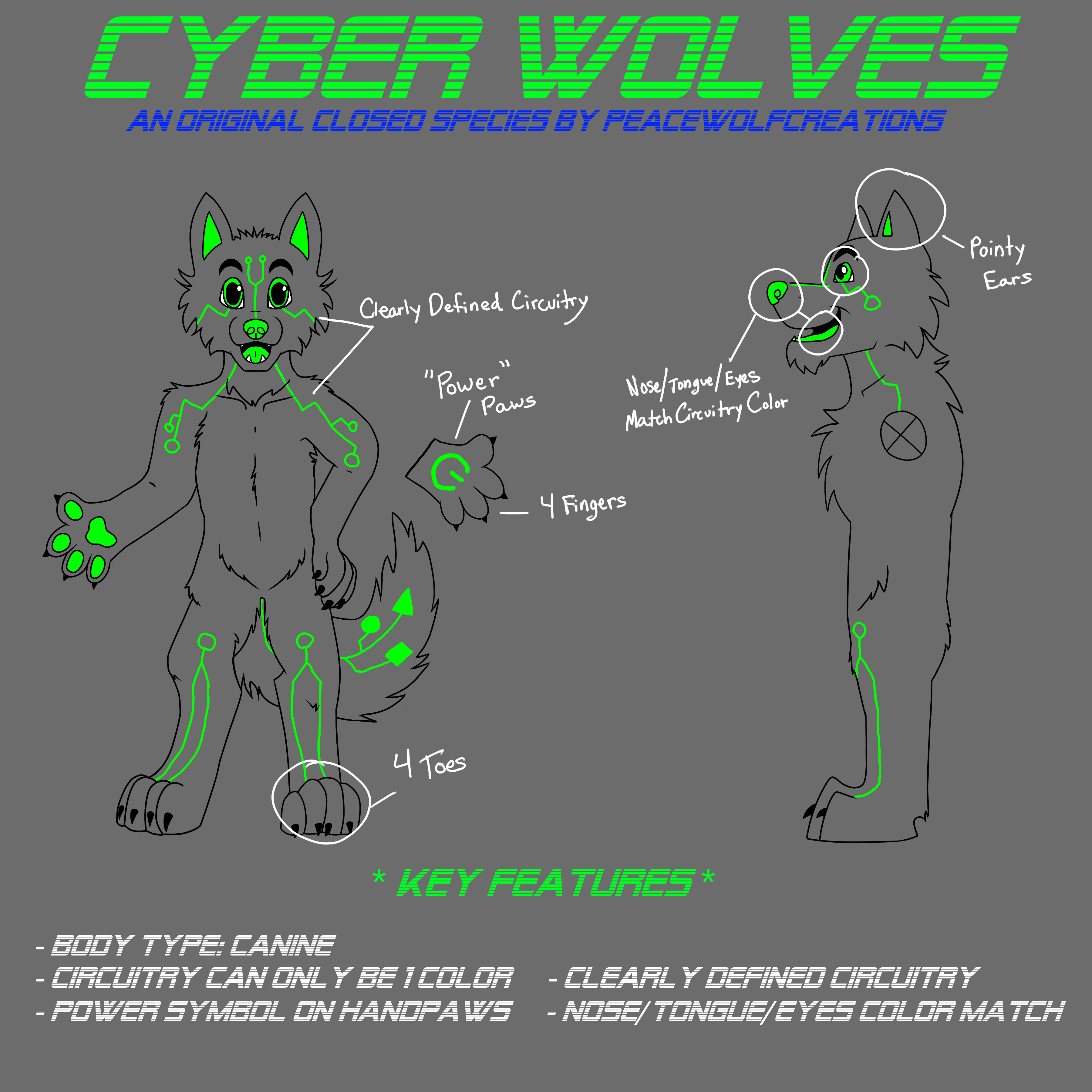 In the year 2018, a lone black wolf in search of food and shelter stumbles upon a facility where cybernetic robots are created to assist in the everyday life of humanity. Curious and eager to escape the storm raging outside, the wolf ventures in and walks into a dark room. He sniffs cautiously as he walks around the unknown area, and stops with his paws standing on some exposed computer wiring. Thunder is rolling gently outside as rain taps on the roof. Suddenly there is a loud crack of lightning and the facility is struck, sending bolts of electricity flying in every direction. The wolf, still standing on the wire, is zapped, and he yelps in pain and shock. He stumbles over and is lying on the ground, twitching as the electricity courses through his veins.

He closes his eyes as he wishes for death - but instead wakes up to find that he is now in a cage, surrounded by curious scientists. The scientists are amazed at his survival, and have discovered that parts of his fur now resemble those of computer circuitry. His nose and eyes glow brightly when he's awake. He can calculate and process information as fast as a computer.

The scientists care for the injured animal and nurse him back to health, give him a name, and gain his trust. The wolf learns to control his newfound enhancements and befriends the scientists. They collect a sample of his altered DNA, and decide to create a legacy of this new amazing species: which they affectionately named, the Cyber Wolf.
PeaceWolf Creations Official Site